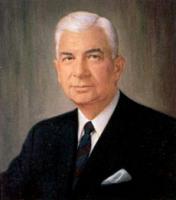 Albertis S. Harrison Jr. was born in Alberta, Brunswick County, Virginia. He received an LL.B. from the University of Virginia in 1928. Prior to being elected governor, he served as City Attorney of Lawrenceville, Virginia and Commonwealth's Attorney for Brunswick County. He was also a member of the Virginia State Senate from 1948 to 1957 and Attorney General from 1958 to 1961. During his gubernatorial tenure, Harrison focused on industrial development and diversification, built new postsecondary technical schools, expanded branch colleges, modernized highways, and promoted tourism. He also chaired the Southern Regional Education Board (1963-65) and was vice chair of the Southern Governors' Conference (1964-65). After leaving office, he served on the Virginia Supreme Court and chaired the Commission on Constitutional Revision.