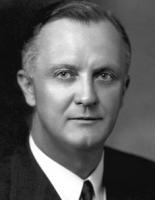 Colgate Whitehead Darden, Jr. was born on a farm near Franklin, Virginia on February 11, 1897 and served in the French Army and the United States Marine Corps Air Service during World War I. He later attended the University of Virginia, where he was a member of Phi Gamma Delta fraternity, and graduated in 1922 before going on to Columbia Law School (grad. 1923) and then Oxford University. He was a member of the Virginia House of Delgates from 1930 to 1933 and a U.S. delegate to the United Nations General Assembly in 1955. He died in 1981 at his home in Norfolk, Virginia.

As governor, he reorganized Virginia's civil defense, reformed the penal system, and created a pension plan for state employees and teachers.

Darden was elected president of the University of Virginia in 1947, despite public misgivings from some among the University faculty, who resented his lack of faculty experience, and a portion of the student body, who feared that he planned to abolish the fraternity system at the University. The latter concern had its origin in Darden's actions as Governor of Virginia, where he recommended barring students at the College of William and Mary from living in fraternity or sorority houses on the grounds that it was "undemocratic" and placed undue financial burden on parents. While Darden did not impose similar restrictions at Virginia, he did attempt to implement other measures, such as a ban on first year rushing.

At Virginia, Darden was responsible for the building of the student union building, named Newcomb Hall for his predecessor John Lloyd Newcomb; the establishment of the Judiciary Committee, which handled student misconduct that did not rise to the level of an honor offense; the creation of the graduate school of business administration, named in his memory; and significant improvements to faculty salaries. Upon his retirement, he was presented with the Thomas Jefferson Award and the Raven Award.