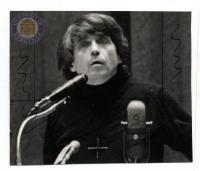 Poet, priest, teacher and war protester Daniel Berrigan was in the news for four months in 1970 while he eluded J. Edgar Hoover's FBI. He and his activist brother, Philip (who only disappeared for 10 days), had exhausted their appeals in a 1968 conviction for publicly burning draft files that they and seven others had grabbed from a Selective Service office in Catonsville, Maryland. After occasionally surfacing at rallies against the U.S. war in Vietnam, Berrigan was finally arrested in Rhode Island. His ensuing 18 months in federal prison was his hardest but not last time behind bars. He and Phil each made a regular ministry of commiting repeated acts of civil disobedience to protest war, weapons and violence. Dan's career also included teaching and campus ministry at Cornell University, the University of Manitoba, and a Jesuit seminary in California -- as well as unsung work with cancer and AIDS patients in New York City, where he now lives in a community of priests.

He was ordained in the Roman Catholic branch of Christianity in 1952 as a member of the Jesuit order... He and Boston University professor Howard Zinn went to Hanoi in 1968 as representatives of the antiwar movement to welcome the North Vietnamese government's goodwill release of three captured U.S. flyers... His autobiography is To Dwell in Peace (Harper and Row, 1987).