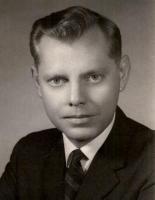 Daniel J. Meador received his J.D. from the University of Alabama in 1951, served as a Judge Advocate General officer in Korea, and received an LL.M. from Harvard Law School in 1954. He clerked for Supreme Court Justice Hugo L. Black, practiced law in Birmingham, Alabama, and joined the law faculty at the University of Virginia in 1957, leaving once to serve as Dean of the University of Alabama Law School from 1966 to 1970. His courses included Federal Jurisdiction and Procedure, Constitutional Litigation, Legal Method, Federal Courts, and Federal Appellate Practice. Meador has been chairman of the Advisory Committee for the Journal of Legal Education and a member of the board of directors of the American Society for Legal History. He served as director of UVA’s Graduate Program for Judges from 1980 to 1995. Meador has participated in numerous projects and organizations concerned with improving the administration of justice, including the State Justice Institute, the American Judicature Society, and the American Bar Association Standing Committee on Federal Judicial Improvements. From 1977 to 1979, Meador served as an Assistant Attorney General in the U.S. Department of Justice, heading a newly created Office for Improvements in the Administration of Justice. He also served as executive director of the congressionally created Commission on Structural Alternatives for the Federal Courts of Appeals.

A recipient of the Thomas Jefferson Award, the Raven Award, and the Alumni Association Distinguished Professor Award, Meador retired from teaching in 1997. He describes the challenge of balancing teaching, scholarship, and professional activities: “Zeal for getting to the bottom of legal conundrums can so preoccupy the mind that the classroom is neglected. I tried always to guard against this, reminding myself that for the students the classroom comes first.” Meador is Professor Emeritus at UVA Law.