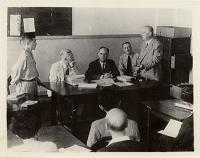 David Nelson Sutton was born on July 14, 1895 in Stevensville, King and Queen County, Virginia.  He received his A B. degree from Richmond College (now University of Richmond).  He was a student at the Department of Law between 1919-1920. [Alumni records state that he graduated in 1920 an others 1921.  Spec. Coll. thinks that the 1920 date is more accurate.]

He participated in WWI, first enlisted as a private and later commissioned in the regular army.  He resigned his commission as 1st. Lt. Cavalry, Regular Army to enter the University of Virginia in 1919.  He was admitted to the Virginia Bar in 1920.

Mr. Sutton practiced law in West Point, Va. He was director and general counsel of the Citizens & Farmers Bank, attorney for the Commonwealth for King William County, Virginia (1928-1946.

He was “governor” of the Kiwanis International (1940); president of the Virginia State Convention of the Disciples of Christ (1942); vice-president of the International Convention of the Disciples of Christ.  He was on the Board of Trustees of Lynchburg College, University of Richmond and Lexington Theological Seminary.  Member of the Institute of Judicial Administration; member of the American Bar Association.

In 1936, 1940 and 1944, he participate as delegate to the Democratic Conventions.  From 1946-1948 he was associate counsel for the International Military Tribunal for the Far East, Tokio, Japan in the trial of General Tojo and other important  Japanese political leaders.

Mr. Sutton was president of the Virginia State Bar Association from 1948-1949.  He was member of the Virginia State Bar, 1945 -1954 where he was chairman of the commission on continuing legal education (1949-1952). Also he was  fellow of the American Bar Foundation, member of the American College of Trial Lawyers,  the Society of International Law, the Academy of Political Science?, American Judicatore Society, Raven Society of the University of Virginia.

He was president of the Alumni Association of the University of Richmond, and of Phi Beta Kappa, Delta Sigma Rho, Sigma Upsilon.