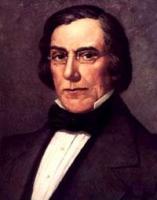 Peter V. Daniel was born in Stafford County, Virginia on April 24, 1784. He was educated by tutors and attended the College of New Jersey (now Princeton University) for one year, from 1802 to 1803. Daniel then returned to Virginia and read law in Richmond under Edmund Randolph, who had been Secretary of State and Attorney General under President George Washington. Daniel was admitted to the bar in 1808 and established a law practice. The following year, he was elected to the Virginia State Legislature. In 1812, he became a member of the Virginia Privy Council, an executive advisory and review body. In 1818, he was elected Lieutenant Governor of Virginia, retaining his Council seat. He occupied both of these positions for the next seventeen years. President Andrew Jackson appointed Daniel to the United States District Court for Eastern Virginia in 1836. President Martin Van Buren nominated Daniel to the Supreme Court of the United States on March 3, 1841. The Senate confirmed the appointment on January 10, 1842. Daniel served on the Supreme Court for eighteen years. He died on May 31, 1860, at the age of seventy-six.