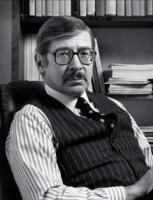 Born in Amherst, Ohio, Richard B. Lillich received his bachelor's degree from Oberlin College in 1954; his LL.B from Cornell Law School in 1957, with a specialization in International Affairs; and his LL.M and J.S.D from New York University School of Law in 1959-60, with a specialization in International Law. Lillich was admitted to the New York Bar in 1957. He practiced private law until 1960 and then joined Syracuse University College of Law where he was a professor and director of International Legal Studies until 1969. In 1963 and 1966-67 he was a Ford Foundation Fellow and a Guggenheim Fellow in England. He came to the University of Virginia that same year and was named Howard W. Smith Professor in 1977. In 1994 he was named Visiting Edward Ball Eminent Scholar Chair in International Law at Florida State University College of Law. He held both of these positions until his death in 1996. In addition he was a visiting professor or fellow at many prestigious institutions, including the United States Naval War College; the Centre for International Studies, Cambridge, England; New York University School of Law; All Souls College, Oxford, England; the Max-Planck Institute, Heidelberg, Germany; University of Georgia School of Law; and St. Louis University School of Law.