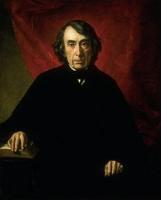 Roger Brooke Taney was born on March 17, 1777, in Calvert County, Maryland. He was son of Michael Taney, a planter and politician, and Monica Brooke. Taney’s ancestors had arrived in the Maryland colony in the 1660s and by the time Taney was born in the late eighteenth century, his family had established a reputation as one of the most prestigious families in the colonies. Growing up, Taney received lessons from a private tutor and then supplementary lessons in gentlemanly matters from his father.

In 1792, at the age of 15, Taney was sent to Dickinson College in Carlisle, Pennsylvania to learn the skills necessary for a profession. There, he met Dr. Charles Nisbet, a teacher there, who later became a key influence in developing Taney’s career and ambitions. On a personal level, Taney became so close with the teacher that Taney’s father asked him to become his guardian while he was away at school, especially since Taney was one of the youngest students there. He graduated in the fall of 1795 with a Bachelor of Arts degree and was voted class valedictorian by his peers. However, Taney was so shy that giving his speech at commencement was a nerve-wrecking experience. According to his memoir, he was “sadly frightened, and trembled in every limb, and…much mortified” under the obligation of giving his speech.

After he graduated, for the next three years Taney apprenticed with Judge Jeremiah Townley Chase of the Maryland General Court and he was admitted to the bar in 1799. However, his law career was initially short-lived. In 1799, he was elected to the Maryland House of Delegates and he became the youngest delegate. After serving just one term, he was defeated by the Republican candidate in 1801 and lost again in 1803. For nearly two decades between his terms as a delegate and a senator, Taney practiced law in the state of Maryland. Taney was elected to the Maryland State Senate in 1816. In 1821, after serving as a state senator, Taney returned to his private law practice.

In 1827, he was appointed attorney general of Maryland, and on December 27, 1831, he succeeded John M. Betrien as Attorney General of the United States. Historians justify Andrew Jackson’s appointment saying that Taney, like the President, was opposed to rechartering the Second Bank of the United States, which was a major issue of the era and Jackson wanted to fill positions with those who agreed with him. As Attorney General, he became one of President Jackson’s most trusted counselors and was then appointed Secretary of the Treasury in September 1833, during a congressional recess. Before Congress began for the next session, Taney proceeded to withdraw federal funds from the Second Bank and establish a system of government depositories. However, when Congress reconvened, for the first time in history, they rejected the president’s selection of a cabinet officer, forcing Taney to resign in June 1834. Similarly, when Gabriel Dural, Associate Justice of the United States Supreme Court retired in January 1835, President Jackson named Taney for the vacant judgeship, but the Senate refused to ratify the nomination. Finally, in March 1836, with the Senate back under Democratic control, President Jackson nominated Taney for the judgeship after Chief Justice John Marshall died in December 1835. Taney was commissioned on March 15, 1836 and sworn in on March 28, 1836 as the fifth Supreme Court Chief Justice.

Since Taney was so different from the previous Chief Justice and since Marshall had been the Chief Justice for nearly 35 years, it took time for Taney to earn the respect of his fellow justices and members of the legal community, however, he was eventually proved himself as an able constitutional theorist and judicial leader. In short, Taney’s judicial opinions as Chief Justice reversed a pattern of interpretation established by his eminent predecessor, John Marshall. Instead of emphasizing federal supremacy, Taney upheld state sovereignty, especially in relation to the threatened domination of the South by the North. As Timothy Huebner says in his book The Taney Court, “The Taney Court built on Marshalls’ work without either blindly adhering to precedent or needlessly overturning it. Instead, the Taney Court adjusting existing constitutional doctrines to the demands of the age—to the new, more open, and more enterprising society that had began to emerge during Jackson’s presidency.”

Several of the cases in 1837 showed the difference between Taney’s view of the constitution and that of his predecessor, who had been more and more drawn to allow a wide scope to the powers of congress and to limit the sphere of state sovereignty. For example, in the case of Prigg vs. the Commonwealth of Pennsylvania, Taney pronounced a state law unconstitutional. In the case, Prigg, as agent for a Maryland slave-holder, had seized and carried back to her master an escaped female slave, for which he was indicted under a state law, which made it a penal act to carry a negro or mulatto by force out of the state. Many of the other justices were not used to Taney’s view on the government and some earlier decisions made by the Supreme Court nearly made Justice Joseph Story resign. With regard to the Taney Court, Chancellor of New York James Kent said that he had lost confidence in the constitutional guardianship of the Supreme Court.

Furthermore, the Dred Scott decision showed Taney’s view of state supremacy, as he ruled that a slave under Missouri law had no constitutional right to bring suit in federal court, most clearly demonstrated this view. Besides having significance in characterizing Taney’s legacy as Chief Justice of the Supreme Court, nearly 150 years after the case, the Dred Scott case was one of the most notable and influential cases Taney decided. In summary, the case involved the question whether congress had the power to exclude slavery from the territories. In 1846, Dred Scott, a slave, sued his master for freedom. In 1850, the Missouri Circuit Court granted Scott’s request and declared him a free man. However, the widow of his former master, John Emerson, appealed the case to the Missouri Supreme Court, which overturned the ruling and pronounced Scott a slave, making him incapable of filing suit in a common law court.

By 1854, the case had made its way to the Supreme Court, and, after being argued twice, it was finally decided in 1857. The opinion of the court was written by Chief Justice Taney and the other five judges who concurred in the decision delivering separate opinions. In the court opinion, Taney said that the plaintiff, Dred Scott, was in error because he had petitioned the United States circuit court in Missouri but he was not a citizen of that state. Specifically, his decision said: “They had for more than a century before been regarded as beings of an inferior order, and altogether unfit to associate with the white race, either in social or political relations, and so far inferior that they had no rights which the white man was bound to respect, and that the negro might justly and lawfully be reduced to slavery for his benefit.” Later in the decision, Taney said that the Missouri Compromise and other laws of Congress that inhibited slavery in the territories of the United States were unconstitutional, and that whatever measure of freedom Dred Scott may have acquired by his residence in Illinois, he lost by being subsequently removed into the territory of Wisconsin, and by his return then to Missouri. Some historians say that Taney’s beliefs ultimately changed the course of American history, referring to the fact that his family had held slaves since their arrival in the colonies in the seventeenth century. The decision was delivered two days after the inauguration of President James Buchanan and the decision produced a strong reaction from citizens all around the country.

He remained the Supreme Court Chief Justice until his death, giving him the second-longest tenure of any chief justice—Marshall, his immediate predecessor, had served for more than three decades. At the age of 87, Taney died on Oct. 12, 1864 in Washington D.C. Ironically that was the same day that the state of Maryland abolished slavery. Taney was predeceased by his wife and youngest daughter, who had both died of yellow fever in 1855, the same year that the Dred Scott case was heard. Reflecting on the legacy and impact of Chief Justice Taney, his presence on the bench was not respected by all. In the preface for his book The Taney Court, author Timothy S. Huebner says: “After the death of Chief Justice John Marshall, many Americans viewed Taney as a poor replacement for Marshall, who had already achieved the status of mythic greatness in some quarters. Taney, in contrast, seemed too much a product of the rough-and-tumble politics of the age and too closely tied to the president who appointed him. President Andrew Jackson, the self-proclaimed champion of the so-called common man, had elevated Taney to the bench after the lawyer had served extraordinarily controversial stints as U.S. attorney general and secretary of the treasury.”

Although historians agree that Taney made significant contributions to American constitutional law, he is primarily remembered for the Dred Scott case, which inflicted enormous injury to the Court as an institution because of the dissention of judicial opinions. Huebner cites the issue of slavery as the reason for Taney’s fame. In the book The Taney Court, he says: “Had it not been for the slavery issue—which had practically never intruded itself into the work of the Court during the Marshall era—Taney and his colleagues might have attained reputations equal to those of their early-nineteenth-century predecessors.” However, his decision in the Dred Scott case was not respected. To quote Huebner’s book, “Almost immediately after the Dred Scott decision, Taney went from being perceived as a respected jurist and worthy heir to Marshall to being compared by some, literally, as Pontius Pilate.” This view is shown in a letter to the editor from an anonymous writer in New York that ran right after his death in 1864. The letter said: “As a man, a Christian and a Jurist, he falls below the lowest standard of humanity, religion and law recognize among civilized men…As a Jurist, or more strictly speaking, as a Judge, in which character he will most be remembered, he was, next to Pontius Pilate, perhaps the worst that ever occupied the seat of judgment among men.”

However, Taney was remembered positively by some. Judge William Fell Giles of the United State District Court in Maryland, as quoted in Lewis’ books, said this in his memorial to Taney: “For eleven years I have been associated in the Federal Court in this State with this great man…Now, when he has passed away and no work of mine can offend his modesty, I can truly say that I have never known a purer or better man, one who loved his country more, or whose heart was more alive to every warm and generous feeling of our nature.” Additionally, overlooking the Dred Scott decision, Huebner says that Taney is “generally regarded today as a ‘great’ chief justice” because of his cases dealing with economic issues and the reevaluation of separation of powers.

From a home-schooling primary education in Maryland and a collegiate education at Dickinson College in Carlisle, Pennsylvania, Taney went on to become not only an influential lawyer and politician in Maryland and then, later, the Chief Justice of the Supreme Court. During the decades when he served, it was a time of great social change in America, culturally, socially and politically and it is clear that Chief Justice Taney left a mark on history through his judgments and decisions.