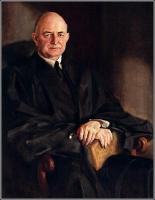 Stanley F. Reed was born in Minerva, Kentucky, on December 31, 1884. He was graduated from Kentucky Wesleyan University in 1902 and Yale University in 1906. After studying law at the University of Virginia and Columbia University, Reed took graduate courses in international law in Paris, France, in 1909 and 1910. Reed practiced law with a firm in Maysville, Kentucky, from 1910 to 1917, and served for four years in the Kentucky General Assembly. He went on active military duty in World War I, after which he returned to his law practice in Maysville. In 1929, President Herbert Hoover appointed Reed Counsel to the Federal Farm Board. Two years later, he was promoted to General Counsel of the Reconstruction Finance Corporation. In 1935, President Franklin D. Roosevelt appointed Reed Special Assistant to the Attorney General, and later that year Roosevelt appointed Reed Solicitor General of the United States. On January 27, 1938, President Roosevelt nominated Reed to the Supreme Court of the United States. The Senate confirmed the appointment on January 31, 1938. Reed retired from the Supreme Court on February 25, 1957, after nineteen years of service. After retirement, he served briefly as Chairman of President Dwight D. Eisenhower’s Civil Rights Commission. He died on April 2, 1980, at the age of ninety-five.