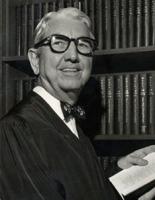 Tom C. Clark was born on September 23, 1899, in Dallas, Texas. Following military service in World War I, Clark enrolled at the University of Texas, and received his law degree in 1922. Clark practiced law in Dallas until 1927, when he was appointed Civil District Attorney of the City. After serving five years he resumed his law practice. In 1937, Clark was appointed a Special Assistant in the Justice Department, and promoted to Assistant Attorney General in 1943. President Harry S. Truman appointed Clark Attorney General of the United States in 1945, and he served in that position until 1949. On August 19, 1949, President Truman nominated Clark to the Supreme Court of the United States. The Senate confirmed the appointment on August 24, 1949. Clark served on the Supreme Court for seventeen years. He retired on June 12, 1967, when his son was appointed Attorney General of the United States. Following his retirement, Clark served as the first Chairman of the Federal Judicial Center, which was created by Congress to improve federal court administration. Clark also accepted assignments to sit by designation on various United States Courts of Appeals until his death on June 13, 1977, at the age of seventy-seven.