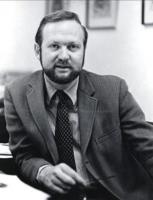 Walter J. Wadlington received his A.B. from Duke in 1951 and his LL.B. in 1954 from Tulane University, where he was editor-in-chief of the Tulane Law Review and elected to the Order of the Coif. He practiced law in New Orleans, served in the Army Judge Advocate General Corps, and spent a year as a Fulbright scholar and tutor at the University of Edinburgh. He joined the Virginia Law faculty in 1962 after teaching for two years at Tulane Law School. He taught courses which included Modern Social Legislation, Law and Poverty, Domestic Relations, and Juvenile and Family Courts. An eminent scholar in the fields of family law, law and medicine, medical malpractice, and children in the legal system, Wadlington is a member of the American Law Institute and of the Institute of Medicine of the National Academy of Sciences. He directed the Robert Wood Johnson Foundation's Medical Malpractice Program and chaired the advisory board of its program on Improving Malpractice Prevention and Compensation Systems. He has served on the National Advisory Board on Ethics in Reproduction, chaired the Virginia State Bar Association Committee on Domestic Relations, and co-chaired the National Task Force on Day-Care Licensing. He was a visiting professor or fellow at York University, LSU, UNC, Brown, Southern Methodist University, the Australian National University, and William & Mary.

Wadlington’s teaching and writing in the area of family law served as a logical stepping off point for his interest in law and medicine, beginning with an early focus on the rights of children in the medical care context and growing to include the practical and ethical dilemmas encountered in the delivery of health care. At its 35th reunion, the Class of 1967 honored Wadlington with major funding contributions made in his name to the James Madison Professorship, held by Wadlington from 1970 until his retirement in 2002.