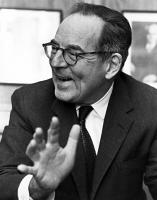 Adrian Sanford Fisher was born January 21, 1914. He was an American lawyer and federal public servant, who served from the late 1930s through the early 1980s. He was associated with the Department of War and Department of State throughout his professional career. He participated in the U.S. government's decision to carry out Japanese -American internment and the international (1945–46) Nuremburg trial, and in State Department Cold War activities during the Harry S. Truman administration. He was the State Department Legal Adviser under Secretary of State Dean Acheson. During the John F. Kennedy, Lyndon B. Johnson and Jimmy Carter administrations, Fisher was directly involved in the negotiations of international nuclear testing and non-proliferation agreements. He died on March 18, 1983.