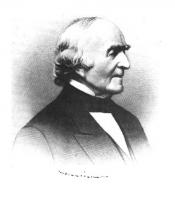 Lawyer and financier Chauncey Dewey was born on March 27, 1796 in Norwich, Connecticut.  He attended Union College in Schenectady, New York and graduated in 1820.  After college Dewey moved to Cadiz, Ohio and studied law under General W.B. Beebe.  After his admission to the Ohio bar, Dewey formed a partnership with Steubenville lawyer and future Ohio Senator Benjamin Tappan under the firm of Tappan & Dewey.  In 1836, Dewey formed a new partnership in Cadiz with Edwin M. Stanton, future Secretary of War from 1862 to 1868 under presidents Abraham Lincoln and Andrew Johnson.  That partnership dissolved in 1842, and that year Dewey formed a new partnership with Stuart B. Shotwell under the firm Dewey & Shotwell of Cadiz.  Dewey retired from the law practice in 1849 and became a leader in Cadiz’s growing banking industry.  In 1849 he was elected president of the Harrison Branch of the State Bank of Ohio and remained its president when it converted to the Harrison National Bank of Cadiz in 1865.  He was a director of the Pittsburgh, Cincinnati, & St. Louis Railroad. In 1823 he married Nancy Pritchard, and the couple had ten children.  Dewey died in Cadiz on February 15, 1880.