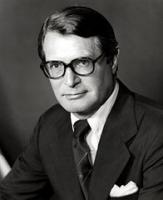 Elliot Richardson was born in 1920 in Boston, Massachusetts. He graduated from Harvard College with a bachelor's degree in 1941. After serving in the Army during World War II, he continued his education, receiving an LL.B. degree from Harvard Law School in 1947. From 1947 to 1949, Mr. Richardson clerked for Judge Learned Hand of the U.S. Court of Appeals, and for Supreme Court Justice Felix Frankfurter. Late in 1949 he became an associate with a private law firm in Boston, where practiced until 1957, when President Eisenhower appointed him Assistant Secretary for Legislation for the Department of Health, Education, and Welfare. In 1959, President Eisenhower appointed Elliot Richardson as United States Attorney General for Massachusetts. In 1964 he was elected Lieutenant Governor of Massachusetts, and two years later was elected that State's Attorney General. Mr. Richardson was sworn in as Under Secretary of State by President Richard Nixon in 1969; and then in 1970 President Nixon appointed him Secretary for the Department of Health, Education, and Welfare 1970, a position he held until 1973. He passed away in 1999.