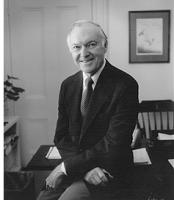 A physicist, Frank Hereford took a B.A. from the University of Virginia in 1943 and the Ph.D. in 1947. He was involved in research for the Manhattan Project during the Second World War as a student of the late Professor Jesse W. Beams, who called him “one of the best all around physicists with whom I have ever been associated.” During the war, he was also a member of a University of Virginia team of scientists who developed anti-aircraft ordnance for the Navy. Mr. Hereford subsequently was a National Academy of Sciences Research Fellow and then a physicist at the Bartol Research Foundation in Swarthmore, Pennsylvania.

Frank Hereford returned to the University of Virginia in 1949 as Associate Professor of Physics. He became Professor of Physics in 1952 and was elected to a chair as the Robert C. Taylor Professor of Physics in 1966, a title he held until his retirement in 1992, when he was elected Emeritus. He was a Fulbright Scholar at the University of Birmingham in England in 1957-1958 and Visiting Professor at the University of St. Andrews in Scotland during 1971-1972. He e celled as a teacher and as a researcher – he was the author of more than 60 scholarly articles during his career and he was the co-discoverer of the presence of heavy particles striking the earth from outer space – and he returned to the classroom and the laboratory when he retired from the presidency of the University in 1985. As President, he was instrumental in the founding of SURA, the Southeastern Universities Research Association, which brought the Jefferson Laboratory to Newport News, and thus established a world center of nuclear physics in Virginia. His scholarship earned him a number of awards and positions on a variety of professional committees.

Active as a student in the wide range of extracurricular activities e pected in those days of leaders among the student body, his interests as a faculty member e tended beyond his department. He served on a number of boards in the Charlottesville community outside the University, and he became Dean of the Graduate School of Arts and Sciences in 1962, a position he held until his appointment as Provost in 1966. As chief academic officer, he was credited with helping President Shannon recruit an outstanding faculty which laid the foundation for the University of Virginia’s present strength. He was largely responsible for the creation for the Center for Advanced Studies which has been a major factor in the advancement of the faculty.

Frank Hereford retired as Provost in 1971 and returned to full time teaching at the University in 1972 after his visiting professorship in Scotland. He was elected President of the University of Virginia, the fifth person to hold that office, in September, 1973 and he succeeded President Shannon a year later.

Perhaps because of his background as a scientist and his extraordinary successes as Provost in attracting grants for scientific research to the University, Frank Hereford took office worrying about what he saw as an imbalance between the sciences and the humanities. He expressed those concerns in his inaugural address, in which he e tolled the perspective and breadth of learning of Thomas Jefferson, the founder of the University, as an e ample that was still valid. It was a theme he returned to often during his administration.

By 1974, it was apparent that the days of generous public funding of higher education, both from Washington and from Richmond, were drawing to an end. Mr. Hereford realized that the University needed the resources to become more self-reliant. Supported and directed by the Board of Visitors, the University embarked on its first major capital campaign in 1981, a campaign which ran until the end of 1984, thus causing Mr. Hereford to e tend his term of office for a year beyond the ten years he had agreed to. A genial, courteous and gregarious man, he was e tremely popular among alumni and he raised most of the money himself in a very successful campaign. An athlete in high school, he was an avid tennis player and duck hunter for most of his life.

Frank Hereford received the Thomas Jefferson Award in 1966; it is the most prestigious faculty prize at the University of Virginia. He was a member of Phi Beta Kappa, the Raven Society, Omicron Delta Kappa, Sigma i, Alpha Tau Omega and TILKA, and a recipient of the University’s Raven Award. He was a Fellow of the American Physical Society and the Virginia Academy of Science and he held honorary degrees from several institutions.

He was a member of the Seven Society.