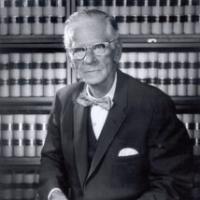 George E. Allen, Sr. was born in Lunenberg County, Virginia, on March 31, 1885. He attended Virginia Polytechnic Institute and the University of Virginia. After receiving a Bachelor of Laws degree from the University of Virginia in 1910 he began a law practice in Victoria, Virginia. Elected as mayor of Victoria in 1914, he also represented the 28th District in the State Senate from 1916 – 1920. After being defeated for reelection he returned to private law practice. He thereafter became and remained active in bar affairs and legal education. A good source for Allen’s personal and legal philosophy, family background, and brief summaries of his major cases is his autobiography, The Law as a Way of Life: Memoirs of George E. Allen, 1910 – 1970.