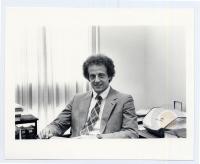 Harvey Perlman was born in Lincoln, Nebraska in 1942 and raised in New York. He earned his B.A. in history from the University of Nebraska in 1963 and went on to the University of Nebraska College of Law, where he served as editor in chief of the Nebraska Law Review and was elected to the Order of the Coif. After completing his law degree in 1966, he spent a year as a Bigelow Fellow at the University of Chicago Law School, then joined the Nebraska Law faculty in 1967. An expert in torts and intellectual property, Perlman took a visiting appointment at the Florida State University College of Law in 1973 and was honored with the University of Nebraska’s Distinguished Teaching Award in 1974. Later the same year, he came to the University of Virginia School of Law as a visiting professor, and in 1975, he accepted a permanent appointment teaching torts, regulation of the competitive process, and legislative drafting. He was a visiting professor at the University of Puget Sound Law School in 1978 and spent the 1981-1982 school year as the Ida Beam Distinguished Visiting Professor at the University of Iowa. In 1983, he returned to Nebraska as the dean of the Law College, a post that he maintained until 1998; after stepping down from the deanship, he remained on the Nebraska law faculty. In 2000, Perlman was named chancellor of the University of Nebraska – Lincoln.
Perlman is a Life Fellow of the American Bar Association and a longtime member of the American Law Institute. He has an extensive record of service on the Boards of Directors for the NCAA, the Lincoln Chamber of Commerce, the Nebraska Innovation Campus Development Corporation, the American Inns of Court Foundation, and Nebraska Continuing Legal Education. He has also chaired the Bowl Championship Series Presidential Oversight Committee and served as the acting director of the Nebraska Commission on Law Enforcement and Criminal Justice and the Governor's Committee on Judicial and Social Reform. He is one of the Commissioners of Uniform State Laws for the State of Nebraska and has served as Vice President of the National Conference of Commissioners on Uniform State Laws. Perlman’s contributions have been recognized by the Nebraska State Bar Association, with its George Turner Award, and by the Lincoln Chamber of Commerce, with the Roger T. Larson Community Builder Award.