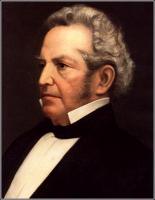 James M. Wayne was born in Savannah, Georgia, around 1790. He was graduated from the College of New Jersey (now Princeton University) in 1808 and read law under three different lawyers in Savannah, Georgia, and New Haven, Connecticut. Wayne was admitted to the bar in 1811 and entered a law partnership in Savannah. During the War of 1812, Wayne served with a volunteer Georgia militia unit. He was elected to the Georgia State Legislature in 1815 and became Mayor of Savannah in 1817. In 1820, Wayne was elected to the Savannah Court of Common Pleas, and he was appointed to the Superior Court of Georgia two years later. Wayne left the Court in 1828 and ran successfully for election to the United States House of Representatives. He was re-elected twice and became Chairman of the House Committee on Foreign Relations. President Andrew Jackson nominated Wayne to the Supreme Court of the United States on January 9, 1835, and the Senate confirmed the appointment five days later. Wayne served on the Supreme Court for thirty-two years. He died on July 5, 1867, at the age of seventy-seven.