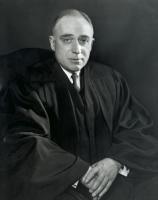 Grandson and namesake of Associate Justice John Marshall Harlan (1877-1911), John Marshall Harlan, II was the son of John Maynard Harlan, a lawyer and Chicago politician. He attended the Latin School of Chicago, a private day school, and two well-respected boarding schools in Canada. Upon graduation from secondary school he enrolled in Princeton, where he was an editor of the student paper and class president. He graduated in 1920, won a Rhodes scholarship, and for three years attended Balliol College, Oxford, where he studied jurisprudence.

Returning to the United States in 1923, Harlan settled in New York and began working for a distinguished Wall Street law firm while studying at New York Law School. He received his law degree and was admitted to the bar in 1925. That same year his mentor at the law firm, Emory Buckner, became U.S. Attorney and appointed Harlan Assistant U.S. Attorney for the Southern District of New York, in charge of the unit that enforced Prohibition. He moved on to a two-year stint as Special Assistant Attorney General of New York before returning to his old law firm, where he built a successful career in the upper echelons of Wall Street. Except for military service during World War II, he remained in private practice until 1954, when President Dwight Eisenhower appointed him to the U.S. Court of Appeals for the Second Circuit. Later that same year a vacancy appeared on the Supreme Court, and Eisenhower nominated him to fill it.

Harlan was a son of privilege, and his social background played a role in shaping his judicial philosophy. While others on the Court were suspicious of big business and sensitive to the pains of poverty and oppression, Harlan had for years been a legal adviser to the DuPont family and had moved among the wealthy and social elite of New York City. While the Supreme Court under Chief Justice Earl Warren typically ruled in ways that furthered egalitarian and humanitarian interests, Harlan generally opposed decisions crafted to achieve socially desirable outcomes. He carefully weighed both formal interpretation and social impact when making a decision and granted especial importance to precedent. He was assiduous in creating opinions that could serve as a basis for decisions in future cases. He sought to protect a balance between federal and state powers, protecting states from zealous attempts to regulate their law enforcement or limit their experiments in social planning. He felt that politics, not the courts, was the correct arena for addressing such issues and stated: "The Constitution is not a panacea for every blot upon the public welfare nor should this court ... be thought of as a general haven of reform movements."

Harlan and Felix Frankfurter became important conservative voices on the largely liberal Court. Harlan embraced common-law principles of interpretation and rejected strict textual reading of the Constitution and attempts to interpret according to what its Framers "actually meant." Gravely ill from spinal cancer, Harlan retired from the Court in 1971.
1955-1971; Supreme Court Justice