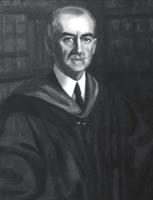 A native of Alabama, William Minor Lile received his LL.B. from the University of Virginia in 1882. He began teaching law at Virginia in 1893 and in 1895 was a founder of the Virginia Law Register. In 1896 he was made administrative head of the law school and in 1904, when Edwin Alderman became the first president of the University of Virginia, Lile became the first Dean of the Law School. He helped to initiate the Virginia Law Review in 1913 and he greatly expanded the law library. Lile believed strongly that law students should be able to locate primary authority and to perform legal research and writing effectively. To that end he, like many of his predecessors, wrote and published extensively. Ever cognizant that graduates of the law school require practical preparation for their professional careers, Lile writes in the 1904/05 Department of Law Catalogue that “The student is taught that books are the working tools of the lawyer, and that facility in handling them, in the office and in the court room, is an indispensable professional acquirement.”

Lile felt strongly that casebook approach to the study of law, popularized by Christopher Langdell of Harvard, did not provide an adequate framework of general subjects and he wrote in 1921: “With most of the other law schools of our country now thoroughly wedded to the so-called Case System, we find ourselves almost in a class to ourselves. We are thought of, and not infrequently referred to by our contemporaries, as old-fogyish, and out of date. But we have held to our own methods—not from ignorance of the virtues of the other system, but from deliberate choice.  . . . our men go out into the profession not only with excellent reasoning powers, but fully equipped with a knowledge of fundamental legal principles.” By the time Lile retired in 1932, the entrance requirements for the law school had evolved from not even demanding a high school degree to requiring two years of undergraduate study; the length of instruction at the law school increased from one to three years, the number of law school faculty grew from 4 to 8, the law school moved first into Minor Hall, then Clark Hall where it would remain until 1974, women were admitted for the first time in the 1920-21 session, and the University of Virginia joined the Association of American Law Schools. Lile died in 1935.