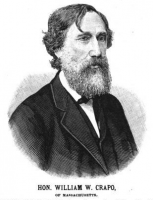 After the Civil War the United States sought restitution from Great Britain which, despite its neutrality, had allowed Confederate cruisers bent on destroying U.S. commerce to come and go from its ports during the war. The U.S. government and private citizens claimed millions of dollars of damage and loss at the hand of these cruisers. The Treaty of Washington, signed by the U.S. and Britain in early 1871, among other things, provided for arbitration of these claims. In the fall of that year, representatives of the two countries went to Geneva to argue their cases before an international arbitration tribunal, the first of its kind. The United States' case was argued by former Assistant Secretary of State Bancroft Davis, along with lawyers Caleb Cushing, William M. Evarts, and Morrison R. Waite, under the direction of Secretary of State Hamilton Fish and Secretary of Treasury George Boutwell. On the tribunal were Charles Francis Adams representing the U.S., Chief Justice Sir Alexander Cockburn of Great Britain, along with arbitrators from Brazil, Italy, and Switzerland. At the conclusion, Great Britain agreed to pay the U.S. the $15,500,000 (£3,200,00) awarded by the tribunal to cover the depredations of the cruisers Alabama, Florida,and Shenandoah.

Bancroft Davis and members of the cabinet had originally hoped to recover far more from Great Britain than the amount of loss directly attributable to the cruisers. They had wanted to hold the British liable for losses in commerce, hikes in insurance rates, and even the general costs of a protracted war. The tribunal was not sympathetic to this side of the U.S. case, and subsequently, individual claimants feared that the government would try to withhold some of the award for the ailing treasury. Congress, however, favored the claimants and, soon after the arbitration award was made, established a Court of Commissioners of Alabama Claims in Washington to handle individuals' cases.

The letters in this collection were written to William W. Crapo, a lawyer in New Bedford, Massachusetts. Crapo, educated at Yale College and Harvard Law School, began practicing law when he was twenty-five. That same year he became city solicitor and the following year, representative to the General Court. He was also active in politics, serving three terms in Congress and running unsuccessfully several times as the Republican candidate for governor of Massachusetts. By Crapo's fortieth year, 1870, when this correspondence begins, he was a prominent figure in legal, business, and political circles in his state. Along with other New Bedford lawyers Charles R. Tucker and George C. Crocker, Crapo was beginning to prepare claims for a number of New England "Sufferers," principally whalers, who had lost property to or incurred damage because of the Confederate cruisers' actions. In addition Crapo worked closely with New York lawyers Henry A. Barling and A. H. Davis, who were partners, as well as Charles C. Beaman, Jr.

Beaman, formerly private secretary to Massachusetts Senator Charles Sumner, published The National and Private "Alabama Claims: and Their "Final and Amicable Settlement""in March of 1871, and early the following year was sent to Geneva to assist Bancroft Davis in arguing the U.S. case by gathering and presenting evidence of the claims. The association of Crapo, Barling and Davis with Beaman was critical to the preparation of their clients' claims, as well as to their tactical lobbying efforts in Washington between the time of the award and the creation of the Claims Commission.